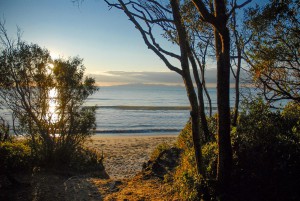 Cala Violina is a real jewel of a bay which is situated near the border of the Natural Reserve of Le Bandite di Scarlino. The bay is surrounded by two rocky cliffs and is nestled in the scrub. It is rather small but it has a white sand beach with crystal clear sea water. In brief, it’s a dream beach.Its beautiful name derives from the sound produced by the sand and the seashells caressed by the waves. If you want to hear it, though, we advise you to go to that bay in low season. The beach can be reached only on foot, it’s 1,5 km far from the parking lot. You’ll enjoy this short walk being surrounded by the oak forest.

It’s better though if you come by bike and not by car. There is a special route 1 of Le Bandite di Scarlino which goes from Puntone Terra Rossa to Podere Laschetti. The route is 8,5 km long with the elevation change of 120 m which correponds to the medium/easy difficulty.